This information presented in this article was found via the Bureau of Transportation Statistics site:

Do you know how often people are killed in alcohol-related highway crashes? Three people every TWO hours. In fact, 4 million U.S. adults reported driving under the influence of alcohol at least once in 2010, with 112 million alcohol-impaired driving episodes. Women should hold their heads a bit higher though, as men accounted for 81 percent of these instances.

As shown in figure 1 below, alcohol-related highway crashes accounted for over 13,000 deaths in 2010, which frankly seems low considering the millions of episodes stated above. The costs are high too, costing Americans an estimate $37 billion. 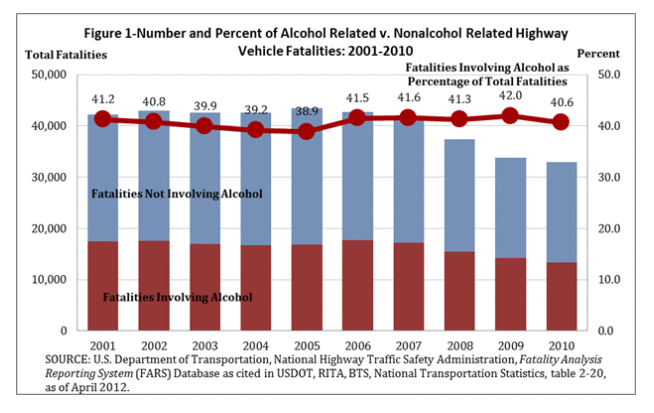 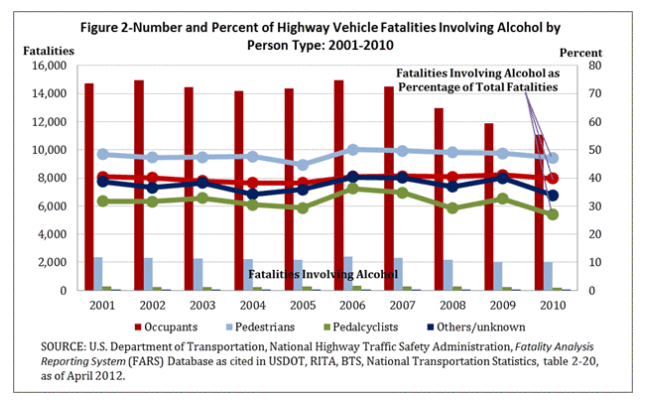 However, drunk driving awareness and enforcement efforts such as Zero Tolerance Laws may be having a positive impact. The percentage of alcohol-related fatalities decreased from 50% in 1990 to 42% in 2009. And all 50 States, including the District of Columbia and Puerto Rico, now have a 0.08 blood alcohol concentration limit for determining if drivers are driving under the influence (DUI) or driving while intoxicated (DWI), up from just 2 in 1990. Among major crimes, driving under the influence has one of the highest arrest rates with more than 1.4 million DUI arrests in 2010.